Due to the ongoing COVID pandemic there were no speaking engagements planned for 2020 or 2021.  However, we are offering a PANDEMIC SPECIAL ... get a copy of each of Carollyne's books for only $20 ... two for the price of one!!  Email me at pepperpotpublishing@gmail.com to order your copies today.  Payment will be accepted via Paypal or Interac e-Transfer.
Click here to order your copies 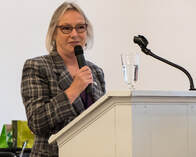 I partnered with fellow author, Janet Dunnett, to speak at the quarterly meetings of the North Island and Nanaimo branches of the National Association of Federal Retirees on the many facets of 'Sunset Love'. 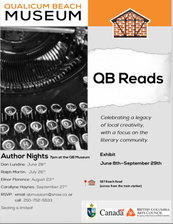 An exciting summer exhibit launched by the Qualicum Beach Museum celebrating a legacy of local creativity, with a focus on the literary community. The exhibit featured four local authors, myself included, the Qualicum Beach library, and Mulberry Bush Bookshop,

Carollyne Haynes - "A Matter of Issue"
by Linda Tenney

Four years in the writing, "A Matter of Issue" is Carollyne Haynes' second novel published on the heels of her award-winning autobiography, "Raised by Committee".

Set in British Columbia, "A Matter of Issue" weaves a complex tale of greed and manipulation within a troubled Canadian family. Death, remarriage and a questionable birth add intrigue to the tangled generations of their family tree, with characters and interwoven backstories that will keep you reading from start to finish.

In our modern age of dynamic family relations that seem to change with the season, Carollyne puts to paper a fictional scenario that could quite conceivably be found in reality. I won't give away the family secrets from "A Matter of Issue", instead, I offer a slice of fractured family life to illustrate the dilemma. Say, for instance, your rich old Uncle Rocco dies with no direct heirs except you and your brother, and then a drug-addicted step-sister from your father's brief marital dalliance four decades ago turns up and wants her share. Imagine the complications. Carollyne's "A Matter of Issue" is even more intriguing than my fictional take on the scenario and throws light on a situation that's not very far from reality in many families today.

I admire the many local writers I've met recently, Carollyne among them. Our lively discussions generally gravitate to an all too common disquiet about idea generation, the need for muses, painful first drafts, hours and hours of editing and re-editing, and finally, publishing.  All writers have angst and all writers agree: writing is not a simple matter of sitting down in front of your computer and letting the words flow from your fingers as fast as they pop into your head. It just doesn't happen that way. Writing is a job. Writing is difficult. Above all, to get a book written, writers persevere with uncommon resolve. Carollyne had some advice on the matter.

"I don't write every day, and I write in blocks. When I'm writing, I'll clear my calendar for a minimum of six weeks. I don't want anyone coming to visit, and I don't want to have to go anywhere," Carollyne tells me.

Writing is a solitary experience, and like any determined writer, Carollyne chipped out time and space for her novel to take shape. "I set up in my office at 9am and told my husband, Jim, unless the house is on fire, don't bother me, and he understood. "From nine until noon, I wrote and if I was on a roll, I'd keep going. But as a minimum, I'd force myself to sit there and write for at least those first three hours."

"With A Matter of Issue, I just kept writing until I could finally say, yes, this is it. Then I handed it over to a girlfriend who teaches at Vancouver Island University to read. I said okay, read this and tell me if I should burn it or keep working on it."

Carollyne's 'editor' had some ideas, and while I won't give away any secrets, I will tell you that after the first read-through, Carollyne agreed she had "put a bow on it" and the ending was a little too tidy for the story's antagonist. "Life's not like that," she reminded me. But you'll have to read the book to discover whether the proverbial bad guy skims through or whether he gets his comeuppance in the end.
by Linda Tenney

,In preparation for our WORD Festival workshop entitled 'Adventures in Elder Land', Janet Dunnett and Carollyne Haynes hosted a Croquet and Critique event to test the waters on issues to be presented.  There was a lively discussion on the challenges of caring for elderly parents along with the sobering realization that WE are about to become the aging parents ... good grief, how did we get so old so fast?  We all know how our individual life stories will inevitably end, but before we get there we still have time for more adventures ... like falling in love again! These and other issues were explored, followed by a cracking game of croquet!  SHAW cable vision captured the event on their 'Community Producers' program ... click here to watch the show.

Adventures in Elder Land with Carollyne Haynes and Janet Dunnett
Presented by INSPIRED Senior Living Magazine
Authors Carollyne and Janet take you on a journey through Elder Land, using fiction that feels like truth, and truth that feels like fiction, to explore the challenges of life’s third act. You’ll smile. You’ll shudder. Most of all, you’ll savour their perspectives on the grit and bliss to be experienced in life’s ultimate chapter. Come share the adventures! Janet Dunnett’s The Dwindling chronicles a decade of family caregiving with Janet as “daughter at a distance.” She lives on Vancouver Island and now advocates for caregivers. She has an identical twin. Carollyne Haynes’ A Matter of Issue is her second novel, following her award winning autobiographical book Raised by Committee. Her stories shine a spotlight on contemporary issues and lays them bare.
​

Come and join us for a relaxed presentation and discussion on 'Adventures in Elder Land' ... a preview to the workshop which Carollyne and Janet will be presenting at the WORD Festival.  We will share our fascinating insights into the challenges and surprising joys of life's 'third act'. From the snarls of elders caring for even more elderly parents, to the risks of third act romances which tangle inheritance expectations.  Janet and Carollyne know their books will strike a chord in many!